"Savoir-faire and Passion for 24 generations."

Baron Alfred De Luze was known to be the founder of a wine and spirits export agency in New York, and a trading house in Bordeaux. Then, Baron De Luze decided to settle in Grand Champagne, to ensure himself a production of cognacs among the best. In 1862 he acquired the Domaine du Chaigne, near Touzac.

The Second World War were raging, when Michel Boisnaud, only 15 years old by the time, started two stills in order to distill the wines from the vineyard of his family. Since then, 24 generations of experts in viticulture and distillation have passed on their savoir-faire.

In 2006, the Boinaud family bought the name of Cognacs De Luze. The Family made the decision to relocate production in Grande Champagne, where the adventure began with Alfred De Luze in 1862. Today, Michel Boinaud and his two sons run the Boinaud group : more than 400 hectares in Grande Champagne - the largest private domain of Cognac. The centuries-old skills as well as this wonderful terroir offer a degree of quality to their Cognac, which honors the name of De Luze. 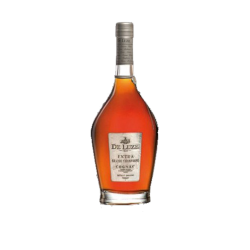